THE LORD IS SAYING HE IS RELEASING THE HEALING ANGEL TO STIR THE WATERS! 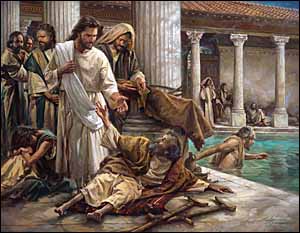 DO YOU REALLY WANT TO GET WELL?

John 5 King James Version (KJV)
"After this there was a feast of the Jews; and Jesus went up to Jerusalem. Now there is at Jerusalem by the sheep market a pool, which is called in the Hebrew tongue Bethesda, having five porches. In these lay a great multitude of impotent folk, of blind, halt, withered, waiting for the moving of the water. For an angel went down at a certain season into the pool, and troubled the water: whosoever then first after the troubling of the water stepped in was made whole of whatsoever disease he had. And a certain man was there, which had an infirmity thirty and eight years. When Jesus saw him lie, and knew that he had been now a long time in that case, he saith unto him, wilt thou be made whole? The impotent man answered him, Sir, I have no man, when the water is troubled, to put me into the pool: but while I am coming, another steppeth down before me. Jesus saith unto him, Rise, take up thy bed, and walk. And immediately the man was made whole, and took up his bed, and walked: and on the same day was the Sabbath."

We are rapidly approaching Rosh Hashanah, the Jewish New Year, 5775, The Head of the Year! This will occur in the 7th month of the Jewish Calendar, Tishri. One of the hallmarks of this year will be grace, and the completion of what was begun in 5776, Year of Jubilee.

It also represents a new beginning, and the start of a new season for us.  I sensed the Lord tell me this was also going to be the year of, “no more delays’.

When you examine scripture you will see that Jesus performed His greatest miracles around the feasts, in specific seasons and on special days, and appointed times.

The Lord brought me to the story in John Chapter 5, seen above.  I sensed Him telling me He was releasing the angel seen here, with the lame man, to stir the waters of healing again.  He impressed on me the importance of this ‘appointed time’, for us now in this day, in this time coming.

You say what is an “appointed time”?  An appointed time is a specific window of time, in which God has set aside for a specific agenda He wants to accomplish.  The terminology ‘appointed times” is mentioned at least 21 times in the Bible. There are also many references to specific seasons as well words, “seasons” and “times”.  There a 7 Jewish Feasts, that as I said, Jesus performed His greatest miracles.  So we can infer from this that there ARE, times in our lives God wants to meet with us in a supernatural way.  I would call them, God Dates”.

What the Lord has been telling me is that there is an “appointed time “coming for those who have been suffering long, in their bodies and minds. It is time for healings that have been long overdue to them, but God has not forgotten them, and there will be now more delay!  Their appointed time is literally around the corner.

The other thing I sensed from God is that some have been struggling for so long, they have gotten used to their infirmity.  I felt him say, “Do they really want to get well’.  One would think so.

The Lord took me to John 5 to examine the man at the pool who was a regular of the Pool with 5 Porches, for 38 years.  I see that as “an appointed place” of Grace, # 5 being number of grace, unmerited favor.

It is not stated in scripture but the man a regular was there every day, collecting alms.  When Jesus approaches him, it seems as though the man’s first comment, after Jesus asks him if he wants to be made whole, implies an excuse as to why he cannot receive his healing.  He has “no one to put in in the waters”, after they are stirred, he retorted.

I think for a split second he had to decide if he wanted his life changed from what he was used to.  He had become comfortable with his lifestyle, even though it was not Gods best. It was all he knew for 38 years. His whole life would change, and he would go from a point of being served, to serving.  To whom much is given much is desired.

As I said, it is not stated in scripture, but can you imagine that as a possibility. Maybe he had unbelief because he had been there so long? Maybe he struggled because he knew it was the Sabbath? He also had some degree of hopeless, because he thought someone else would beat him to it, in the water.
Jesus was giving the man a choice to inherit the full destiny that He had for him.

But Jesus persevered, and WOULD NOT TAKE NO for an answer and spoke with authority, ‘Rise, take up your bed, and walk’. Seems like whatever the hindrances were, God was going to bypass them. His goodness and grace!

We don’t have anything but words to describe what happened, but can you just imagine the love and look of compassion on Jesus face, not to mention his hand extended to the man in such a way, the man could not resist the offer!  What an amazing appointed time, and Kairos moment!

We are leaving the month of Av where the choices we make determine success or failure.  We are leaving the year of the open door and entering a time when the Lord is walking through the door to us, with His scepter extended.

God is saying, there will be no more delay! Be ready when the healing angel is coming to stir the waters.  He is coming with love, compassion and His goodness to make people whole and well, for the Kingdom call, so they can fulfill the God given destinies on their lives.

Mark this on your spiritual calendars. Ready yourself with thanksgiving and praise. Believe His best for you!  Know that for many your lives will change drastically, but the grace will be there for it!!!

Some might say, where is this place?  It’s where you are! Position your heart and mind for your ‘appointed time’ to enter the waters when they are stirred! Believe this is for you!!!! ‘Be there or be square’, the saying goes, the Sun of righteousness is coming with healing in His Wings!